Fact:  Paul Rudd makes his debut in this cursed entry in the Halloween franchise, Halloween The Curse of Michael Myers.

Paul Rudd who would eventually become famous thanks to his role in Clueless made his first big screen debut in this film. However, the final film and the original script are considerably different from what was shown. The only reason Paul Rudd got the role was due to Brian Andrews losing his agent. The producers were unable to contact Andrews.

In the original script, the elements were more psychological terror and it was quickly green lit by Dimension Films. Even series star, Donald Pleasance was impressed with the script. Most of the elements from the original script are found in the Producer’s Cut titled, “Halloween 666”. However, the producer hated the film, rewrote the script and the originally dark movie took a lighter more satirical tone which ultimately had the entire cast disowning the film prior to the release. In total, there were 11 versions of the script during filming. 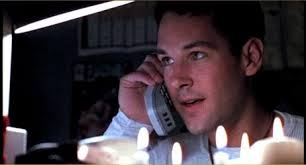 Debra and John Strode in the film are a nod to John Carpenter and Debra Hill. Minnie Blankenship that is mentioned in the film is a reference to Halloween III. When Paul Rudd was asked about his role in the movie, his reply was

Well that sums that up.