Fact: Just like in the movie Avatar, trees can communicate with one another utilizing unique molecules they either create or obtain, much like what occurs in neural pathways.

To do so, they form a symbiotic relationship with a very unique microorganism, fungi. What they communicate is interesting. Just like any other organism on this planet, plants, specifically trees, do speak. If you listen closely, real closely, a neural symphony can be witnessed. That is because trees “talk.” Each ecosystem can communicate and interact with one another in a complete unique set of actions.

All for one common goal, to survive and breed. While the idea that living organisms do speak to one another isn’t captivating by any stretch of our personal imagination, understanding the unique set of reactions set in motion to make this orchestra perform in such high synchronicity is pretty mind-blowing.

One of the pioneering ecologists in this field is Suzanne Simard. While working on her doctoral thesis in the 90s, Simard discovered that not only do trees communicate with one another, they express to one another through specialized signals of threats and kin recognition.

What was so unique about her thesis and why it was published in Nature was because by using radioactive isotopes of carbon, she inexplicably found that paper birch and Douglas fir trees were using an underground network to interact with one another. 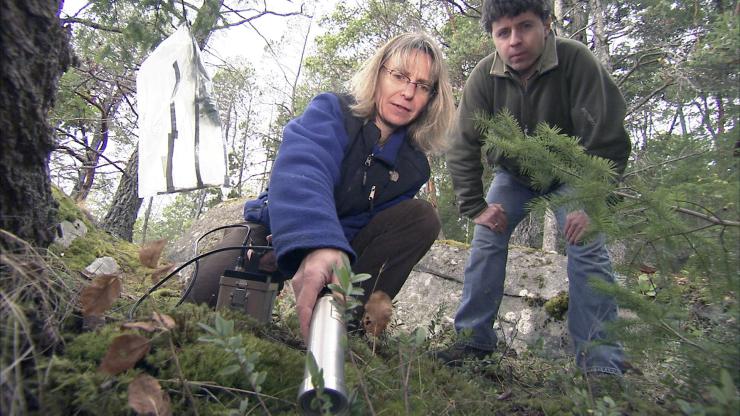 Dr. Suzanne Simard, University of British Columbia and graduate student, Marcus Bingham, use Geiger counter to determine if radioactive materials representing nutrients were shared though the root system from the Douglas fir mother tree to other nearby vegetation creating a symbiotic relationship.

One key ingredient that is necessary for these symbiotic relationships (denoting a mutually beneficial relationship between two organisms) to manifest is below-ground fungi. Fungus is not only the largest, but some of the longest living organisms on the planet. The reason why this relationship occurs is because fungi cannot photosynthesize (utilizing sun light to synthesize food from carbon dioxide and water).

So, fungi will stretch out using what is called mycelium, or threads, throughout the soil to gather nutrients and water, especially phosphorous and nitrogen, brings it back to the plant (in this case Douglas fir or birch), and exchanges it for whats called photosynthate (a sugar or other substance created by photosynthesis). It’s a mutual beneficial relationship. 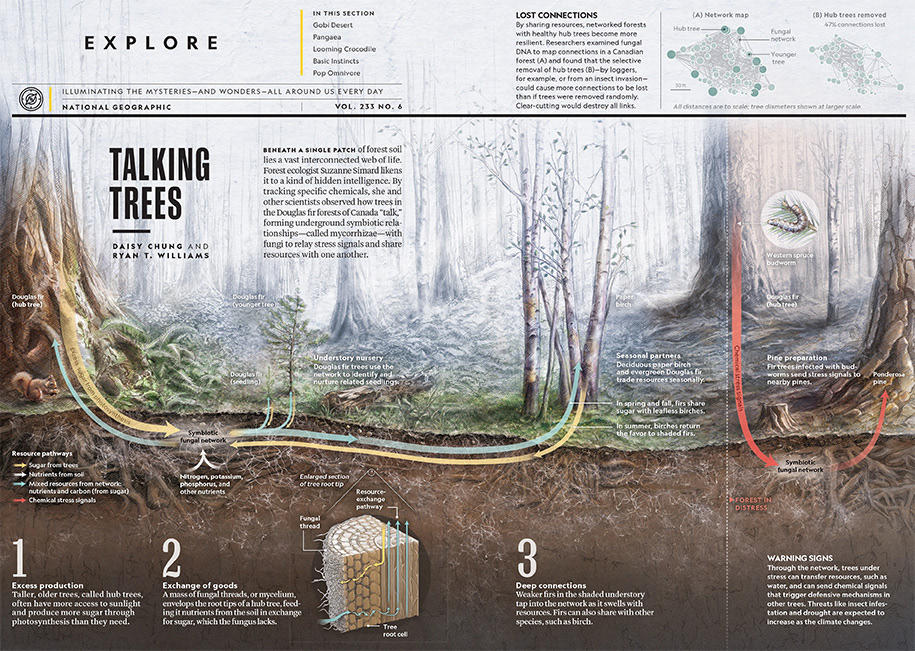 It’s this underground pipeline that connects one tree root to another tree root, a lot like a neural pathway. Interestingly enough, the example of the British Columbia Douglas fir and paper birch is also one of competition for space and food, but in times of nutrient shortages, they send resources to one another through fungi. The fungi must represent that third party transfer agent, and it does so, to survive.

More interestingly, there has been more specific studies into DNA analysis of fungal patches in Douglas firs. These studies not only pinpointed with great accuracy neighboring related sisters and how mycorrhizal fungi link very specific trees in British Columbia, but those trees recognize their own kin.

Meaning, relationships and communication is being directed to known siblings and offspring, on purpose. By creating this map, they also could explicitly tell that older trees created more linkages because they had a more sophisticated root system, which created more carbon.

If this hasn’t gotten any more exciting, Suzanne Simard and colleagues wanted to know what happened to trees in legacy situations. In other words, what happened when a tree population is dying? What happens to neighboring populations that it is interconnected with?

So not only do they communicate, not only do they work together to survive, not only can they recognize and directly connect to their own kin, but they give other tree seedling populations a fighting chance, they sacrifice themselves. In a study conducted by Dr. Simard, when they injured the tree that was considered “mother”, they found that the tree (in this experiment, a Douglas Fir) dumped its carbon into the network, and specifically directed to the seedlings.

In addition, defense signals were up regulated by the Douglas fir and the seedlings in response to the injury. This gave the seedlings a ‘fighting chance’ or head start to assume the dominant role in the ecosystem. Without the fungi mycorrhizal thread connection, this ecosystem wouldn’t survive.

What we currently know about plant organisms and their communication is just the beginning. What we know now is a world that is a bustling system of interconnected brains working together to survive.  Just because we cannot hear them, or understand their body language, doesn’t mean they do not ‘talk’.