Fact: The ‘do not bring a knife to a gun fight’ scene from the first Harrison Ford Indiana Jones movie, Indiana Jones and the Raiders of the Lost Ark 1981, where Indiana Jones shoots the swordsman in Cairo was never intended to happen.

Harrison Ford is an American actor whom has played some of the best roles on Hollywood. In the movie Raiders of the Lost Ark, Indiana Jones was supposed to have a long sword fight with the black masked swordsman in Cairo. The reason the take never progressed was because Harrison Ford was suffering from dysentery during the shoot of the movie. Ford stated in a Q&A hosted by Hero Complex’s Geoff Boucher, 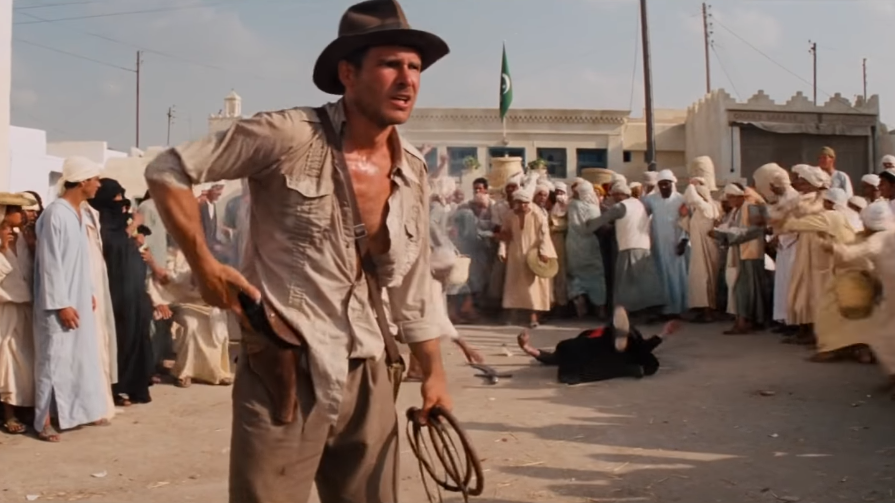 “I had chosen to eat native food, unlike Steven who went to Tunisia with a steamer trunk full of Spaghettios, and I had suffered mightily for that. I was no longer capable of staying out of my trailer for more than it took to expose a role of film, which was 10 minutes, and then I would have to flee back there for sanitary facilities.”

What is saddening by the whole stunt was that the individual playing in the raiders of the lost ark character, the swordsman, had trained a lot so that he could showcase his skills. It was hard for Harrison Ford and Spielberg to let him down.

Ford spoke with Steven Spielberg explaining that he just simply could not do that long of a take, and if there was any way to shorten the scene. The only remedy for this scene was if Indiana Jones took out a gun and ‘just shot the guy’. None of the crew knew that this change had been made. When the scene took, the entire crew on scene were laughing hysterically. That scene is regarded as the best scene in the entire movie.