In 1992, Matthew McConaughey was in college in Austin Texas and is introduced to a producer. They start talking for a little, and four hours later, they get kicked out of the bar. On the way home, the producer asks,

Hey, McConaughey, you ever done any acting.’ And I say ‘Well no, not really’. He says ‘Well, I’m doing this movie and you might be right for this part.’

The next day, McConaughey picks up the script called Dazed and Confused. With his character David Wooderson only having three lines. But McConaughey states that one of these lines is a “launch pad line.” If the person really believes in this line, one can write an entire book on the character. That is what he did.

So in a monologue to the viewers at Saturday night Live, McConaughey states that the scene with the ‘launch pad line’, goes like this —

“The scene goes like this: Wooderson’s hanging out at a pool hall with some buddies, some girls walk by, he smacks one of them on the a** and his buddy says, ‘Man, you’re going to go to jail for that, Wood Man.’ And Wooderson says ‘Nah. That’s what I love about those high school girls, man. I get older, but they stay the same age.”

McConaughey hasn’t started shooting the film yet, but he gets called into see the director. Richard Linklater says,

“Oh my God, you look great, this is Wooderson, this is exactly who I hoped you’d be.”

At this point, again, McConaughey hasn’t even started shooting and only has three lines. The director states they are shooting a drive-through scene tonight, and if Wooderson would be trying to pick up a red head intellectual. McConaughey’s reply is,

“I said, sure he would man, he flirts with all kinds of women.” 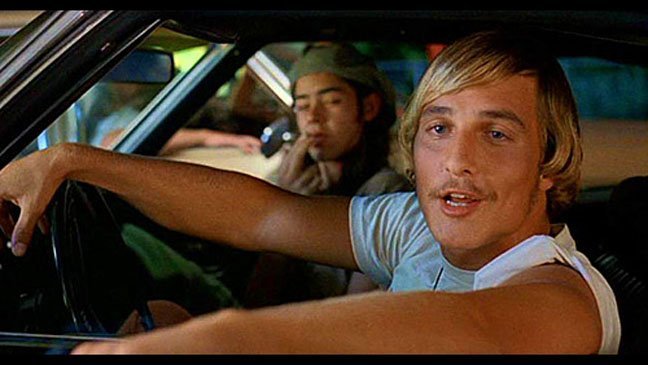 At the scene, McConaughey is sitting in the car about to shoot the very first scene of his career and he starts asking himself, who exactly is Wooderson. He comes up with four things. Wooderson is —

So McConaughey starts looking around and this is what he has to finish in his monologue.

“I look around, where I am, well I’m in my 70’s Chevelle. That’s one. I’ve got Slater riding shotgun, so I’m definitely getting high, that’s two. And we’ve got Ted Nugent playing Stranglehold on the eight-track, well that’s three. ‘

“At this point I hear over the intercom, ‘Action!’ And I look up across the drive-through at this red headed intellectual and I say to myself, ‘Buddy, you got three out of four. Alright, alright, alright!’”