This is something you wouldn’t expect or want to think about now. Actor, Norman Reedus, originally auditioned for the part of Merle Dixon.

Whoa! This is something we really never knew. The actress who plays Tara, is the real life sister of Francis from Malcom in the Middle. Look that up! 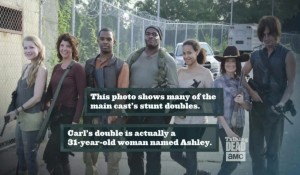 One that has been told to you by many comic fans. Daryl is nowhere to be found in the comic book.

The bag that Daryl finds early when they make it to that mart that crumbles contains blue meth. The writers were paying homage to Breaking Bad. Rightfully so!

For all the jokes that were had about Carl eating pudding. Carl had to eat A LOT OF PUDDING on that ruff. Let’s just say, “he had a bad time.”

Here is an interesting fact that most people don’t pay attention to. In the first four seasons of the television show, the actors never said “zombie” once.

In the comic, Andrea is still alive and she and Rick are in love.

The cast apparently likes taking free selfies… next time call me up! 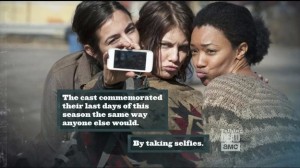 Rick has killed a total of 86 walkers while Daryl a mediocre of only 41. In addition, Rick is from the fictitious King County, which pay homage to Stephen King.

One theory behind “the virus” is that no one actually contracted it or wasn’t contagious. Rather, everyone already had the virus within them. (We find hard to believe).